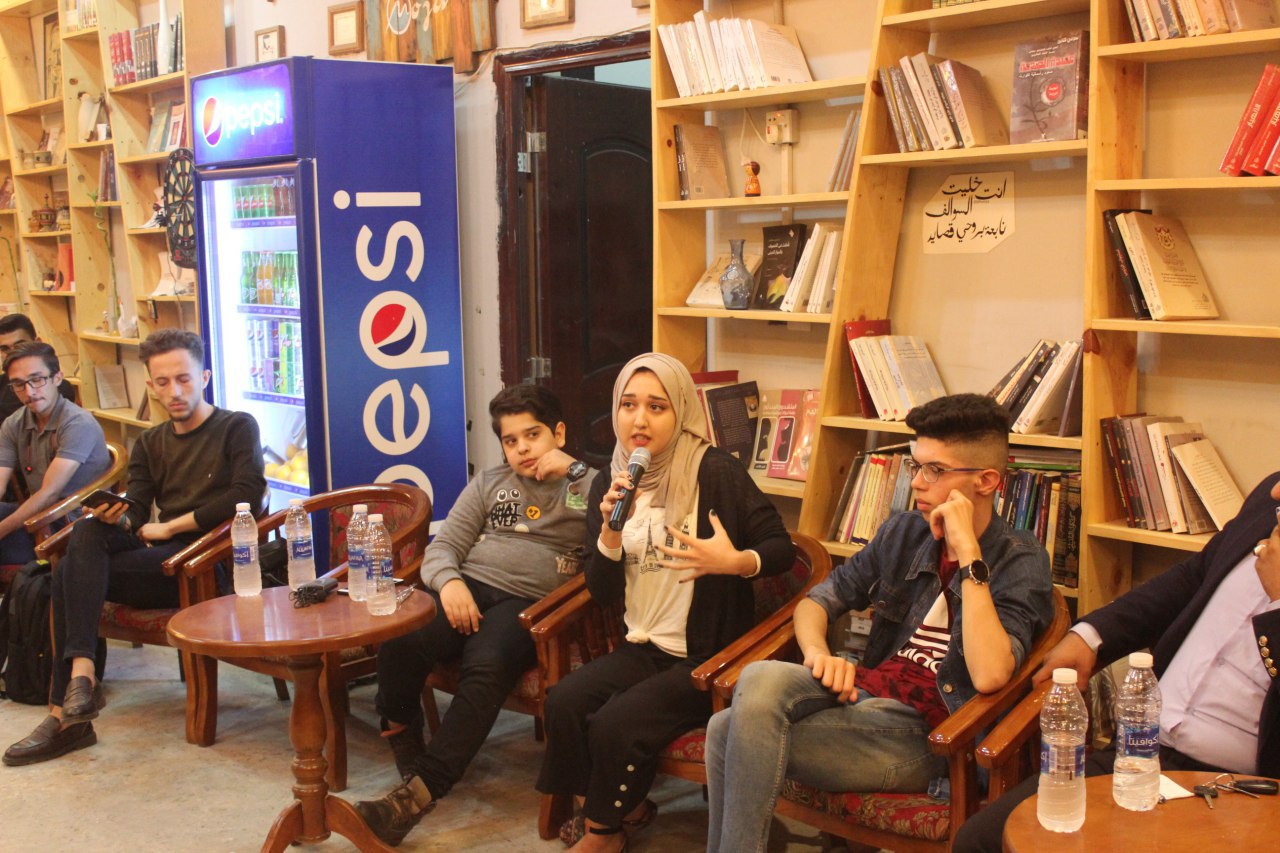 A dialogue session at the Moja Center, in Najaf on 3/11/2018 about the 2018 youth generation and their role in the outcome of the changes taking place at all levels in Iraq, starting with the fall of Mosul, for example, which combined great youth efforts at the military level to volunteer for confrontation or On the humanitarian level, from the formation of relief and rescue teams to the continuation of the awareness-raising activity led by young people also investing in social media, festivals and other cultural events, reaching the stage of the complete liberation of Iraq from ISIS and the weakness and fading of the sectarian discourse, and this was proved by the elections in which the invested forces lost The sectarian hatred towards the exit of the executive authority from the hand of the ruling party for more than 15 years and the existence of a ministerial cabinet without old party faces, and we do not forget that these political changes were accompanied by profound social changes that made closed local societies open up more and change accelerated in them under the pressure of globalization and the ambition of the youth And their longing for a modern and modern life.

The important question revolved around whether we were actually real contributors to these changes?!

Karrar Nasser is a lawyer and director of a young organization

Reem is a student of the College of Pharmacy.

Ali Shukr, programmer and director of the Startup Najaf forum:

Monem is a computer science student and director, Speak Up Najaf,

Ali Al-Khatib is a communications company employee and a civil activist.

Hassanein Falah is a graduate student.

Kawthar is a PhD student

Hussam Al Kaabi is a journalist and reporter for NRT

Hussein Imad is a civilian activist

Hassan Shaaban is a businessman

Maytham Al-Faham a carpenter and a volunteer at Moja

Ali al-Ankouchi is a poet and journalist

Yasser Makki is a dentist and volunteer in Moja

The dialogue began at exactly six o’clock in the evening and the session was opened by Yasser Makki, between the purpose of today’s meeting, and he wished the attendees to present their views on the outcome of the events that Iraq is going through and whether they believe that they have a role in it as active youth on several levels.

Maytham: Who saw that the new generation after the fall of Saddam Hussein had great opportunities for openness compared to the generations of the seventies and eighties, and noted that those eras suffered from difficult circumstances, especially politics, as he stressed the restriction of presenting political opinions in those eras, and comparing them in this The time, considering that that era was a repressive era represented by the presence of the Baath Party and Saddam Hussein’s government, and stressed the seizing of the opportunity for young people at this time when the young man can enter politics, speak freely, and move freely, and stressed that at this time young people have influenced the discourses Political, and setting an example in one of the leaders and their changes, such as Muqtada al-Sadr and his orientation to the civil, and this confirms the impact of young people in changing not only social conditions, but even personalities.

And he stressed the effect of the Basra demonstrations in influencing the government of Haider al-Abadi and condemning the overthrow of the Dawa Party.

Then Al-Kawthar intervened: which emphasized the great influence of social media, and said that young people are the leaders of these sites, and gave an example of the existence of some unacceptable laws, which young people were able to address on the social networking site, where it dealt with an example recently about the law on violence against women , and its interactions with the issue of human rights.

She emphasized the impact of youth on changing events, and cited an example in the Iraqi Parliament Speaker Muhammad al-Halbousi, a young man born in the eighties. She also stressed the interest of Western governments in the impact of youth and their role, and finally pointed to the importance of supporting the new generation and opening ways to help them.

Ali Al-Khatib: He said that the demonstrations increase social awareness and break the barriers of fear among people, and he stressed that this generation does not have fear and great determination and does not know what the red lines are, and the official should be afraid of this generation.

Mortada Al-Khatib: He raised a topic about the aspirations of young people, and stressed that the ambition of a former youth is reduced to political issues, and stressed that this year the Iraqi youth made a priority for him in terms of focusing on starting private business projects, developing businesses and others.

Hossam: He asked why this generation is different from previous generations? He emphasized that previous generations had an impact on the birth of fear in the hearts of the new generation. He stressed that the new government will have an impact on the hearts of young people, by turning to the civil and social government, and stressing that the government of Adel Abdul Mahdi was the one that toppled the deep state that existed during the period of the Dawa Party. He stressed the freedom given at this stage and must be used aggressively, and noted that the next stage will be distinguished from the previous one, and stressed the importance of continuing popular pressure.

Then the mic moved to

Taiba: She referred to the social changes that she had noticed in Najaf in general and her mini-society in particular, as a girl who lives in an open family and gives her a good space of freedom. She considers that her family is one of the rare few Najaf families that allowed her to travel to America alone to study. Taiba now sees that many Among the families, they became more open and allow their daughters to go out shopping or participate in various cultural and artistic conferences and events.

Karrar: He emphasized the sequence of periods that the Iraqi youth has been subjected to from 2004 to the present, which exposed the Iraqi reality to wars, killings and bombings, and created pressures on the Iraqi youth in this generation, and stressed on the intellectuals’ self-isolation without going to the streets and deviating from the reductionist framework.

Then the young man, Ali Shukr, intervened in explaining his experience about encouraging young people to start and develop their own projects instead of relying on the government and employers. 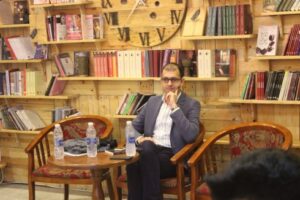 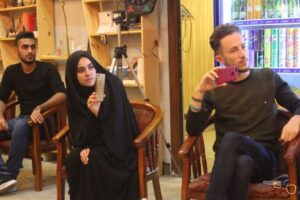 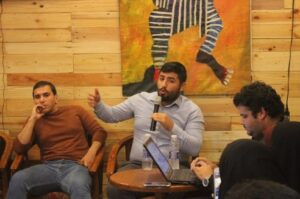 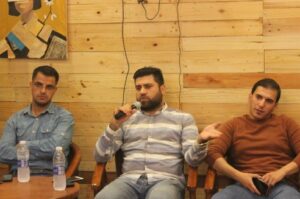 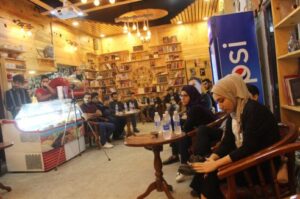 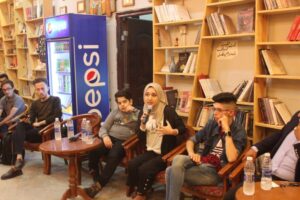 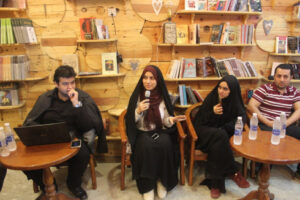 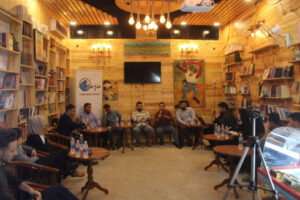 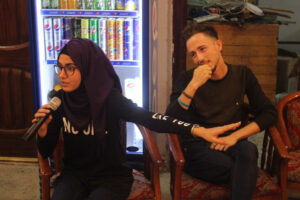 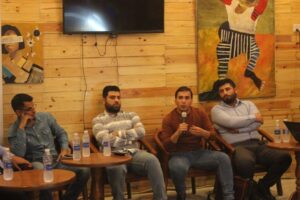 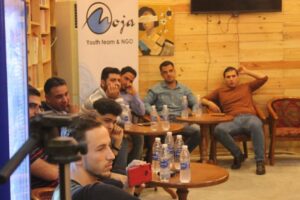 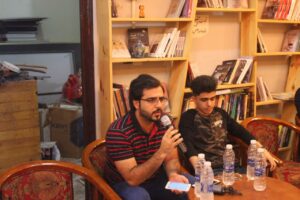