A dialogue session was held in the Moja Library and Café on religious diversity in Iraq, in which we hosted Dr. Saad Salloum, researcher and activist in the field of minority rights and head of the Masarat Foundation, as well as Yazidi human rights activist Saeb Khidr 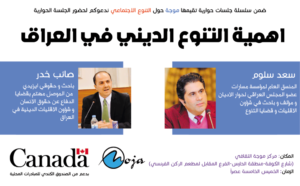 Dr. Salloum began with a seminar that sheds light on Iraq’s intangible wealth, whose importance is equal to the importance of oil, which is religious and ethnic diversity, and the great value it holds, which is one of the great pillars in building a prosperous societies.

Yazidi human rights activist Saeb Khadr drew the attention of the audience to the heinous crimes that the Yazidis were subjected to at the hands of ISIS members, especially what happened in Mount Sinjar and the issue of the kidnapping of Yazidis, and spoke about the need to focus on restoring the right and dignity of the Yazidi society and returning it to the bosom of the Iraqi homeland

To watch the live broadcast recording

The session was supported by the Canadian Fund for Local Initiatives